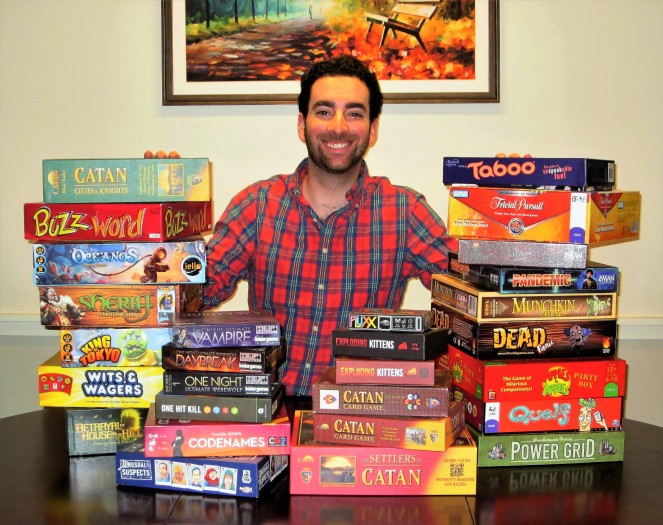 What inspired you to start UnboxBoardom?

I have always been a big fan of board games and spending time with friends and family.  A few years ago, my girlfriend (now wife), Joanna, wanted to get me a “board game of the month” present for my birthday.  When she went to look for this gift idea online, it didn’t exist! Fast-forward a few years, and I was playing several board games with friends over the holidays.  We were all having so much fun, and one of my friends pointed out that I had all of these great, unique games that no one in our group had heard about before. She suggested that I should create an “of-the-month” club for board games. And with that, UnboxBoardom was born!

If you have one game to play for the rest of your life, what is it?

Taboo — it’s such a simple game but drastically changes depending on who you’re playing with!

Do you have any funny board game stories?

I was playing a card game with some friends a few years ago, and one of our friends kept on winning.  We thought he was good….but he was a little too good.  We realized after playing an hour, he had been playing by the wrong rules and “misunderstood” them — the verdict is still out if he “misunderstood” or “cheated”

Favorite board game growing up as a kid and why?

Stratego — I always liked the strategy games growing up and being able to out-maneuver my opponent.  Plus, I loved the mystery and surprise factor involved in the game when you revealed your pieces to the other side!

How many board games do you own?

32 and rapidly growing — contrary to my wife’s wishes

With the spark of everything going digital, why is it important to keep the tradition of table top games?

It wasn’t so long ago that people actually interacted with one another.  Before people were connected to their electronics 24/7, there were board games. Families didn’t sit around the dinner table on their cell phones, they had family game nights. Friends wouldn’t sit in silence and watch TV, claiming they were “hanging out.” They got together for a night of games!  I’ve always enjoyed the competition and laughs I shared with friends and family while playing various games.  Sometimes, it was the thrill of competition when I came from behind to beat my mom at her favorite game. Other times, it was the excitement of receiving a new game for my birthday and playing it for the first time with my cousins. Some of my most fond childhood, and even adult, memories have come while playing board games.  My goal with creating UnboxBoardom was to give others the same opportunity of collecting, sharing, and discovering new games with their family and friends.

3 thoughts on “Get To Know The Founder”